Virat Kohli: A netizen who wants to say about King Kohli in one word. Akhtar’s response is overwhelming.

Virat Kohli-Shoaib Akhtar: Former India captain Virat Kohli is currently in a difficult situation. What was a flood of runs in the past is now struggling with his poor form? Kohli has not scored a triple in international cricket for three years. Some former cricketers are demanding that Virat be dropped from the team. At the same time, whether he plays or not, Kohli should stay on the team, saying he is a game-changing player, and others support him. In this program, former Pakistani fast bowler Shoaib Akhtar (Shoaib Akhtar) again made interesting comments about our run machine.

He is already a legend

Meanwhile, Shoaib will bring his biopic titled Rawalpindi Express to reveal the best moments of his life on the big screen. The sprinter recently shared the movie poster on his social media. On this occasion, he shared many interesting things about his personal life and cricket with netizens. At the same time, he hosted a question-and-answer session with fans. On this occasion, a netizen named Jayan Khan asked him, “What would you say about Virat Kohli in one word?” Akhtar gave a shocking answer. He has already commented on the Pakistani sprinter who is a legend. He is currently trending on the net. Akhtar has supported Kohli many times, not only now but also in the past. Legendary cricketers also have problems with lack of form. Today, Kohli is also facing similar problems. He commented that once he submits the form, no one will be able to stop him.

Q & A for half an hour about this & a lot more. Use the hashtag #RawalpindiExpressTheFilm and you may get lucky with a response. pic.twitter.com/xasTnvvfNH 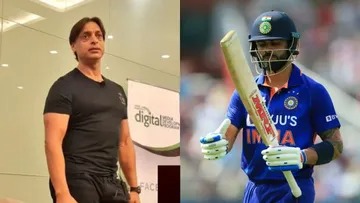