The last Supermoon of 2022 will take place tonight – Know the date and time to see it.

When and where to see the last Supermoon?

The Supermoon will be visible on Thursday, August 11 at around 2136 hrs. EDT (0136 GMT on August 12). “The next full moon will be on Saturday morning, August 13, 2022, and will appear opposite the Sun at longitude based on Earth at 2:38 p.m. EDT. This will be Thursday morning from the Indian Standard Time Zone eastward to the international date line,” NASA previously wrote on its official website.

What is a supermoon?

A supermoon occurs when a full moon coincides with the Moon’s closest approach to Earth in its elliptical orbit, a point known as “perigee.” During each 27-day orbit around Earth, the Moon reaches both its perigee, about 2,26,000 miles from Earth, and its farthest point, or apogee, about 2,51,000 miles from Earth. In this phase, the Moon appears larger and brighter than usual. Supermoons reportedly radiate about 30% more light on Earth than usual.

The main reason behind the supermoon phenomenon is the fact that the moon orbits the Earth in an elliptical or oval shape. So, the distance between the Earth and the Moon varies with time.

How many supermoons are seen in a year?

Supermoons only appear three to four times a year and always happen consecutively. The last Supermoon of 2022 will be visible on Thursday, August 11, 2022. According to NASA, it will also appear nearly full on Friday and Saturday.

Why is it called the Sturgeon Supermoon?

Algonquin tribes living in the northeastern U.S. called the full August moon the Sturgeon moon. They named the moon for the large fish that were most easily caught during that time of year in the Great Lakes. According to NASA, in the 1930s, Maine Farmer’s Almanac began publishing Native American names for full moons. This is how the moon derived its name.

When can we see the next supermoon?

After February’s Flower Moon, June’s Strawberry Moon, and July’s Buck Moon, August’s Sturgeon Moon is the last supermoon of 2022. According to CBS News, the next supermoons won’t be visible until August 1, 2023, and August 31, 2023, and they attributed the fact to In-The-Sky.org, an online guide to what can be seen in the night sky. 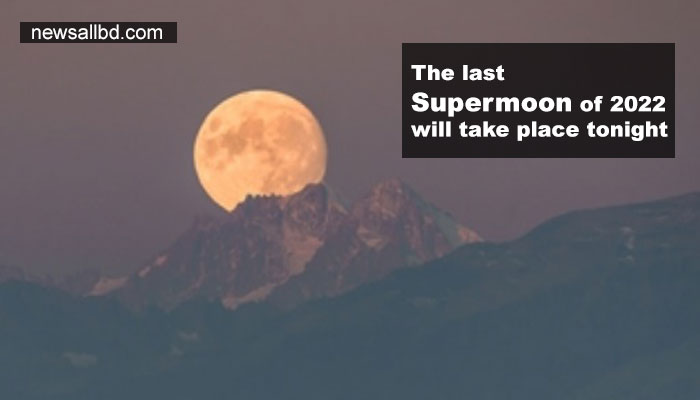