The entrepreneur who created a brand distinct from blazing Black

Located in the heart of Bihar is Purnia, where the concept of start-ups is not the most eminent. But that doesn’t stop those with a passionate heart and an unwavering nerve. Akshay Kumar, the founder of TheBlackLover, is one who possesses both qualities and defied all odds to make a name for himself in a business that is often inhabited by celebrities or fashion icons.

Located in the heart of Bihar is Purnia, where the concept of start-ups is not the most eminent. But that doesn’t stop those with a passionate heart and an unwavering nerve. Akshay Kumar, the founder of TheBlackLover, is one who possesses both qualities and defied all odds to make a name for himself in a business that is often inhabited by celebrities or fashion icons.

But, as they say, when you dream big in life, you have to fight with all your might to live it!

This is the journey of one such dreamer turned achiever – Akshay Kumar, the owner of TheBlackLover, a one-stop destination for all things black you could ever want.

Starting at his appointment with a brand and scaling it to a magnanimous magnitude, the very humble Akshay began living his dream at a time when the pandemic had brought down the world.

What difference is TheBlackLover creating in the trendy arcade?
TheBlackLover makes fashion accessible to everyone. The brand offers its customers the pleasure of finding items that resonate with their personalities.

While the world loves black clothing, there is always a stereotype associated with the color, which didn’t stop Akshay from creating the brand. In fact, he says this is one of the reasons he tries to stay true to his brand, not just to make sales but to break stereotypes.

See also  iPhone 13 gets a massive discount with bank offers: here's how to avail it at Rs 49,900

For most, black is inauspicious and not to be worn on good days, it is a symbol of darkness. Why do we wear black during graduation ceremonies to celebrate education? Why do judges and lawyers wear a black robe during a court proceeding? Why do people in authority wear and travel in black? Ever thought about that, he asks?
Black may be a color that represents some conventional thinking but, despite that, it shows elegance. It represents victory, authority, power, and grace. It is a color that makes anyone, regardless of race and age, look smart and sharp. Black enhances your confidence for that interview or date night. You name an occasion and black will only enhance your appearance and presence there.

His belief in TheBlackLover resonates through the new, solid account of fashion, one that removes all streams of independence. What started as the belief that each person was clearly wonderful with a mutual admiration for black, he wanted to be complicit in their journey to discover and enhance it through shades of black.

Akshay hails from the western edge of the Ganges, in the city of Purnia. He was born to a working doctor mother and a father who served in the government sector. Akshay was sent to a boarding school in DPS, Siliguri at the age of 8. It was here that he nurtured his interest in competitive sports, mainly playing cricket for the Bengal Cricket Association, besides having a natural flair for academics. Akshay was a born achiever in everything he put his hands on, which was reflected in his academic grades throughout. However, things changed when he came to Delhi for his 12th board exams. Health problems combined with the uncertainty of what lay ahead in his career affected not only his academic studies but also his passion for sports. However, Akshay was always fascinated by how his heart had all the answers, instead of following his parents’ suggestion to pursue engineering, he instead entered BBA in international business with Amity University. This, he mentions, paid off handsomely. While some might be surprised at how Amity is not what he proposes to the world, for Akshay the course included the best diverse experience of Singapore and Melbourne and provided him with the learnings of a lifetime.

In fact, he attributes his success to his mentors at Amity University, especially Dr. Kshamta Chauhan and Ms. Aastha Gupta, who played a hugely influential role in his journey. So much was the impact that on completing his degree in 2018, he grabbed an opportunity with NIIT Limited and got a promotion with RNF technologies in a short span of time, however, the learnings from his alma mater kept him on his toes for something of his own.

With the culmination of corporate experience with a diverse understanding of business through his degree, he knew something bigger awaited him. That’s when Akshay left his cocoon of a full-time job, to make his way into the business world with his creation – TheBlackLover.

The idea hit him square in the square when he realized that his identity had become synonymous with the color black. Black for Akshay is not a color of the night, but the color that amalgamates all other shades brightens up any event and soothes even the weariest soul. Eventually, he realized that people only looked at him in black clothes and accessories and thought, why not bring this love for black into my professional passion? And so TheBlackLover was born.

What started as a mere idea, a group of friends motivated him to pursue the thought and passion, dedication, and relentless desire towards the goal that led him to the success he is today.

To this day, his brand is endorsed by the largest e-commerce website Myntra, Amazon, and Ajio Fashion. TheBlackLover will also go international with its first store in Dubai in the coming months. With all the achievements coming his way, Akshay is still hungry to learn and is pursuing his MBA in International Business from Amity International Business School, Noida.

Having said that, you know where to stock your next All-Black look for your closet, need we say more!

Her goal is simple and achievable: dream big and never give up on your goals! 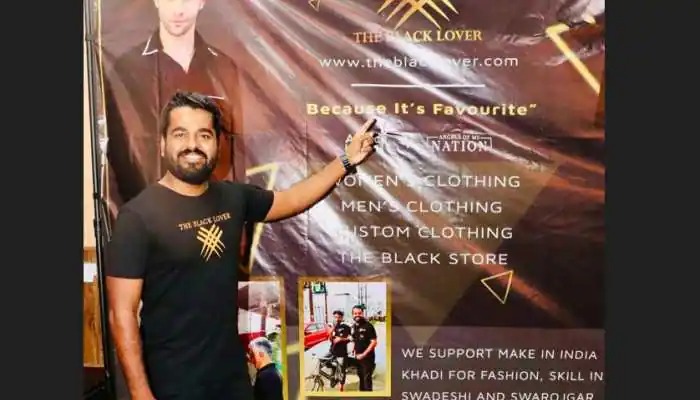