Rudi Koertzen, the former international cricket umpire, died in a car accident. He was 73 years old.

The cricket world has been paying tribute to Rudi Koertzen, the South African umpire famous for his long, slow finger of fate in delivering a player after he died in a car accident at the age of 73.

A popular umpire on the world circuit, Koertzen officiated in 331 international matches during an 18-year career, a record at the time and one that has since been broken by Aleem Dar of Pakistan, before his retirement in 2010.

News of Koertzen’s death broke on Tuesday morning as South Africa’s men walked out for the first morning of their four-day warm-up match against England’s Lions at Canterbury wearing black armbands. “Koertzen’s status as a legend of the game will live on forever,” Cricket South Africa said in a statement.

According to reports in South Africa, the former umpire was one of four people killed in a head-on collision while returning from Cape Town to his home in Despatch, Eastern Cape, after a weekend of golf with friends.

“He went to a golf tournament with some of his friends and they were expected to return on Monday, but it seems they decided to play another round of golf,” he told Algoa FM News.

Koertzen, who started umpiring in 1981 and took part in his first international match in 1992 between India and South Africa in Port Elizabeth, went on to officiate in 331 international matches, a record that stood high until he retired in 2010. He became only the second umpire in history to umpire more than 150 ODIs after the legendary David Shepherd and was also the second to appear in 200 Tests after Steve Bucknor. One of the original members of the ICC Elite Panel of Umpires in 2022.

Marais Erasmus, the former South African umpire, said, “Rudi was such a strong character, physically and mentally. He paved the way for South African referees to reach the world stage. He made us all believe that it is possible. A true legend. As a young referee, I learned a lot from him.”

The last official match Koertzen served in was during the 2011 IPL between Royal Challengers Bangalore and Chennai Super Kings at the Chinnaswamy. Despatch Cricket Club, of which Koertzen was a respected member and a club he helped till the end, paid a touching tribute to the legend.

Koertzen, who worked in the construction industry before becoming a full-time umpire in 1993, bid farewell to high-level umpiring during the 2011 Indian Premier League, but still took part in matches for his local club, Despatch CC.

A club statement read, “A legend in his own right passed away this morning and will definitely leave a huge void in the world of cricket. We would like to express our deepest condolences and empathy to the family and loved ones of Uncle Rudi Koertzen.” 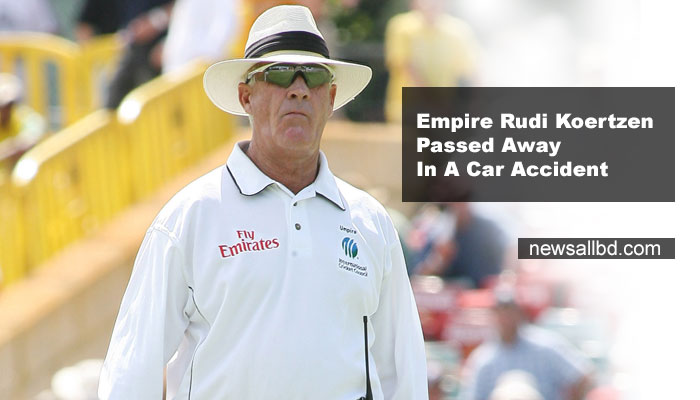