Beautiful photo before the IND vs PAK match at Asia Cup 2022!

Few days left for the start of Asia Cup 2022. Both teams are ready for the high-voltage match between India and Pakistan on August 28. And during this preparation, such an image came out that cricket lovers were eagerly waiting for. This image is from the meeting of Virat Kohli and Babar Azam in the United Arab Emirates.

The Indian and Pakistan teams have arrived in the United Arab Emirates. Players from both teams have also started practice. And during this time, BCCI shared a video on social media. Where players from India and Pakistan are seen coming together during training. Due to this match between the fans of both teams, where there is a lot of hype on social media. At the same time, players of both teams are seen meeting each other very warmly on the field.

# Meeting of Kohli and Babar
On Wednesday, August 24, the Indian national team players were practicing on the field. During this, the Pakistani national team was seen passing by. In the video shared by BCCI, it can be seen that while Kohli was practicing on the field, the then Pakistan captain Babar Azam was coming out of the field with his kit bag. Both players shook hands very cordially upon seeing each other. This image of the two meetings immediately went viral on social media.

# Babar lifted Virat’s spirits
Recently, during the England tour, Virat was targeted by the fans for not scoring runs. Then Babar Azam was fully seen standing in support of Virat Kohli. The Pakistani captain had encouraged Virat through a social media post.

# also met with Afghanistan players
Besides Kohli, other players including Hardik Pandya, Yuzvendra Chahal, Suryakumar Yadav, Ravichandran Ashwin, Dinesh Karthik, and Arshdeep Singh are also seen in the video shared by BCCI. During this, Chahal and Hardik met the Afghanistan players.

#Pakistan is the first match
Team India will play its first match against Pakistan on August 28 in the Asia Cup 2022 to be played in T20I format this year. In this match to be held in Dubai, team India will be looking to avenge the defeat in the T20I World Cup last year. 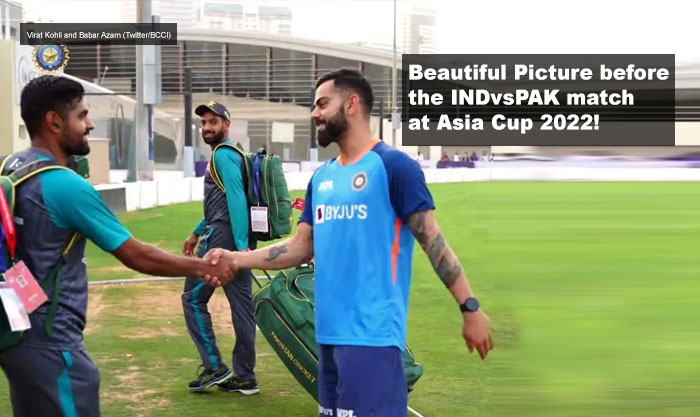