A team of scientists from the CSIR-Center for Cellular and Molecular Biology (CCMB) Atal Incubation Center (AIC) in Hyderabad has indigenously developed a potential mRNA vaccine against SARS-CoV-2.

“The current war against Covid-19 has brought many vaccine technologies to light and India’s vaccine program is highly praised. However, we were missing powerful mRNA vaccine technology, such as developed by Moderna or Pfizer /BioNTech to fight covid-19 in the United States and Europe,” Madhusudhana Rao, executive director of AIC-, told the press. CCMB and principal scientist of the project. here on Friday.

The technology developed by the AIC-CCMB is different from the mRNA vaccine being developed by Genova Bio, which is based on self-replicating RNA, Rao added.

The AIC-CCMB team was able to establish the mRNA vaccine technology and develop an mRNA vaccine candidate against SARS-CoV-2 in less than a year from the start of the project.

“Although Covid-19 is on the decline, the vaccine platform is promising for many infectious diseases India is facing,” Rao said.

“This is a proof of principle where we have shown that we can replicate mRNA vaccine technology from start to finish. The beauty of this technology lies in its modularity and fast turnaround times. This means that with effort much less, the developed technology can be used to generate vaccines for other infectious diseases such as dengue, tuberculosis or malaria,” said Vinay Nandicoori, director of the CCMB.

The CSIR, the largest research and development organization of the Indian Ministry of Science and Technology, has taken far-sighted initiatives to establish capabilities within India in modern health technologies as part of its self-reliance program, he added.

Rajesh Iyer, a scientist involved in the project at the AIC-CCMB, said: “We observed robust immune responses against the Spike protein of SARS-CoV-2 in mice after administration of two doses of the mRNA. The anti-spike antibodies generated turned out to be more than 90 percent efficient in preventing the binding of the human ACE2 receptor to the coronavirus.”

mRNA vaccine technology does this by introducing an mRNA from the microorganism in question. This mRNA in host cells gives rise to the microbial protein, or part of it, that trains the immune system to evade infection when it occurs with the same living organism.

Currently, the CCMB vaccine candidate is undergoing preclinical challenge studies to assess its efficacy in protecting against live virus infection. 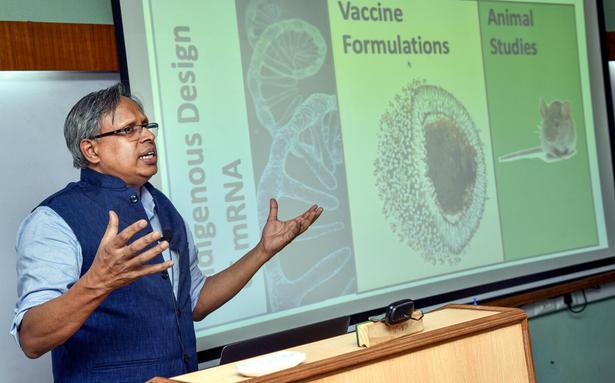