Britney Spears and Sam Asghari announce the loss of Miracle Baby: “This is devastating”.

Britney Spears has suffered a miscarriage.

Just over a month after announcing that she and fiancé Sam Asghari were expecting their first child, the couple issued a joint statement on Instagram confirming the worst:

They have lost this child.

“It is with our deepest sadness that we have to announce that we have lost our miracle baby early in pregnancy,” the couple wrote in the post on Saturday.

“This is a devastating time for any parent. Perhaps we should have waited to announce it until we were further along, however, we were too excited to share the good news.

“Our love for each other is our strength. We will continue to try to expand our beautiful family. We are grateful for all of your support.

“We kindly ask for privacy during this difficult time.”

“We are grateful for what we have in the process of expanding our beautiful family. Thank you for your support.”

On April 11, Britney sounded much more optimistic and exciting when she confirmed she was pregnant.

“I lost so much weight to go on my Maui trip just to get it back… I thought ‘Gee… What happened to my stomach?” explained Britney just a few weeks ago, adding:

“My husband said, ‘No, you’re pregnant silly!’ So I took a pregnancy test… and uhhhhh well… I’m having a baby.”

However, this would have been Asghari’s first child.

“Marriage and children are a natural part of a solid relationship filled with love and respect,” the 28-year-old wrote via social media after his fiancée announced her pregnancy.

“Fatherhood is something I’ve always looked forward to and I don’t take it lightly. It’s the most important job I’ll ever do.”

The couple began dating in 2016 after meeting on the set of the singer’s “Slumber Party” music video.

They became engaged in September 2021, two months before Spears’ guardianship officially ended and she was free from her father’s legal control.

As part of a testimony Spears gave last summer in her bid to free herself from this 13-year guardianship, Britney spoke openly about her desire to expand her immediate family.

She told a judge that her father had been making this impossible.

“I want to be able to get married and have a baby,” she said.

“I was told at this point in the guardianship that I can’t get married and I can’t have a baby,” the star alleged at the time.

Britney added on this same topic:

“I have an IUD in me right now so I can’t get pregnant. I wanted to get the IUD out so I could start trying to have another baby.

“But this so-called team won’t let me go to the doctor to get it out because they don’t want me to have kids, more kids.”

We send our condolences to Britney and Sam during this heartbreaking time. 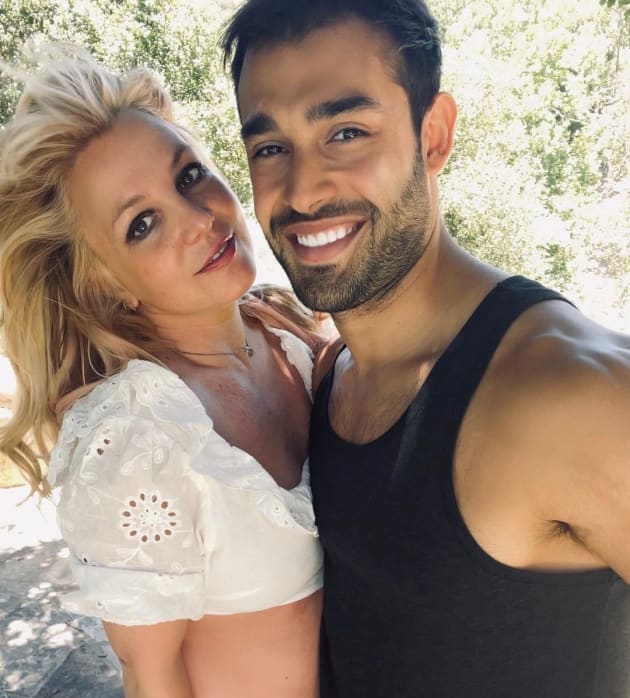