Recently, RRR fashion got another special recognition. The Google company gave a super surprise to the RRR team. We can search for anything on Google. Also few millions of people about RRR.

Google surprise for RRR: Rajamouli made RRR a big multi-starrer with star heroes like NTR and Ram Charan. Everyone knows what a huge hit this movie was in March. It has collected more than 1000 crores. Apart from that, RRR movie is well recognized all over the world. This movie is appreciated by audiences of all countries as well as Hollywood movie stars and technicians.

Recently, RRR fashion got another special recognition. Google company gave a super surprise to the RRR team. We can search for anything on Google. In addition, a few million people have searched Google about RRR. It is known that RRR movie is popular all over the world. Recently, Google has made a surprise for those who Google about ‘RRR’. When you type RRR into Google and hit enter, you will see a bicycle and a horse under the search bar. Once the bicycle comes first, once again the horse comes first.

It is known that Tarak rode a Royal Enfield bicycle while Ram Charan rode a horse in the movie RRR. The scenes of both of them on horse and bike are impressive. RRR film unit and fans are also happy to see this surprise. The ‘RRR’ film unit has made a special post thanking Google for this surprise. “Thank you, Google for surprising us and recognizing the popularity of RRR around the world” by taking a video of the horse and bike going and sharing it. 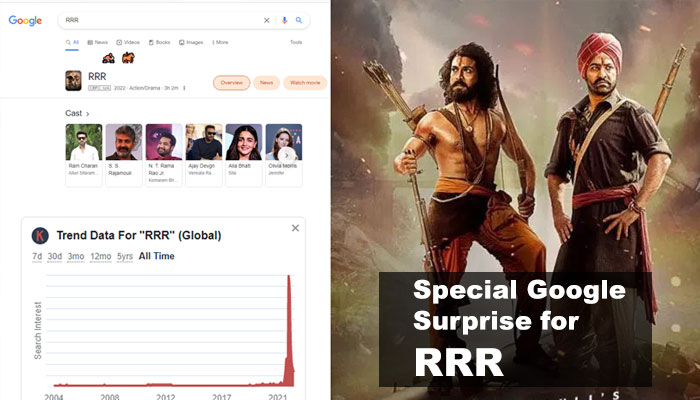