Bravo achieved the feat while playing for Northern Superchargers in their match against Oval Invincibles in The Hundred tournament in progress.

Dwayne Bravo is an absolute legend in T20 cricket and there is no second opinion about it. The West Indies all-rounder still continues to shine in the shortest format of the game as he became the first bowler to claim 600 wickets in the T20s. Bravo achieved the feat while playing for Northern Superchargers in their match against Oval Invincibles in The Hundred tournament in progress.

The right-arm quick first dismissed Rilee Rossouw at LBW before cleaning up Sam Curran for his 600 T20 wickets. Bravo, who is a master bowler, used his best weapon to claim his 600th wicket. The West Indian cleaned up Sam Curran with an off-cutter. And like everyone associated with Bravo, a unique dance move followed Curran’s wicket.

After uprooting Curran’s stumps, Bravo performed a unique dance move to celebrate his milestone. Notably, Bravo achieved the feat in the 516th innings of his T20 career. His overall figures were 2 for 29 in the 20 balls bowled. Bravo is being followed by two other superstars of T20 cricket, Rashid Khan and Sunil Narine, who have claimed 466 and 457 T20 wickets, respectively.

The West Indies cricketer reached the feat of 600 wickets in 545 matches at an average of 24.12 and an economy rate of 8.21. His best bowling figures in the format are 5/23. He retired from international cricket in November last year after the end of his team’s ICC World T20 2021 campaign. 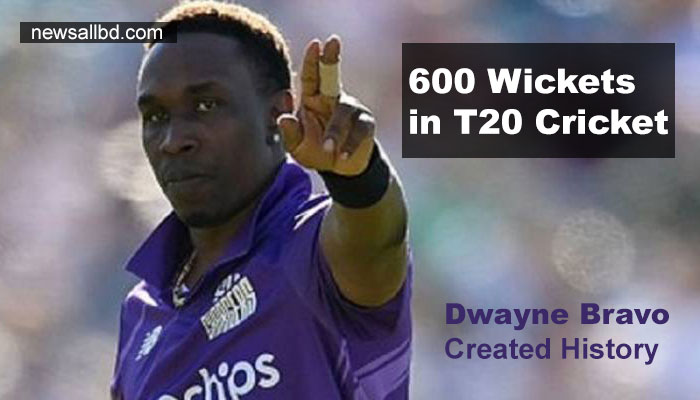