Dr. Pratit Samdani of Breach Candy Hospital told ANI that Jhunjhunwala had a sudden cardiac arrest which was the cause of his death.

He was not keeping well for the past few days and, according to Breach Candy Hospital authorities, he was brought dead to the hospital at 6:45 am on Sunday morning. Moments after his death, tributes poured in from political leaders, personalities from sports, the film industry, and other fields. Jhunjhunwala was born on July 5, 1960.

Condoling Rakesh Jhunjhunwala’s death, Prime Minister Narendra Modi said, “His passing away is sad. Full of life, witty and insightful, he leaves an indelible contribution to the financial world. He was also very passionate about India’s progress.”

Big Bull Rakesh Jhunjhunwala passes away at the age of 62. He was 62 years old. He was not keeping well for the last few days and breathed his last today at Breach Candy Hospital in Mumbai, news agency ANI reported. He is survived by his wife and three children. The son of an income tax officer, Jhunjhunwala started his journey in the stock markets when he was still in college with a capital of just Rs. 5000, and when Sensex was at Rs. 150. Known as the “Warren Buffett of India,” Jhunjhunwala’s wealth was pegged at over Rs. 40 billion, according to Forbes.

In early July 2021, Jhunjhunwala, his wife Rekha Jhunjhunwala, and eight others settled a case related to alleged insider trading in Aptech shares by agreeing to pay more than Rs. 37 million. This is the combined amount paid by ten individuals and includes settlement charges, disgorgement of ill-gotten gains, and interest charges. The case was settled under the so-called consent route, where an alleged wrongdoer can close a pending matter with the market regulator Securities and Exchange Board of India (Sebi) without admitting or denying the charges brought against him.

His portfolio includes companies such as Star Health, Titan, Rallis India, Escorts, Canara Bank, Indian Hotels Company, Agro Tech Foods, Nazara Technologies, and Tata Motors. Overall, he had a stake in 47 companies at the end of the June quarter.
He has worked in about 19 companies, including Tata Communications, Titan Company, Bilcare, Va Tech Wabagh, Federal Bank, and Aptech.

Rakesh Jhunjhunwala was indomitable. Full of life, witty and insightful, he leaves behind an indelible contribution to the financial world. He was also very passionate about India’s progress. His passing away is saddening. My condolences to his family and admirers. Om Shanti. pic.twitter.com/DR2uIiiUb7

Anguished to learn about the passing away of Rakesh Jhunjhunwala Ji. His vast experience and understanding of the stock market have inspired countless investors. He will always be remembered for his bullish outlook. My deepest condolences to his family. Om Shanti Shanti.

Shocked by the sudden demise of seasoned Investor, Shri Rakesh Jhunjhunwala. He will be remembered for his contributions in business and industry. He was at the forefront of creating a culture of investing in Indian stock markets. Condolences to his family and many admirers. 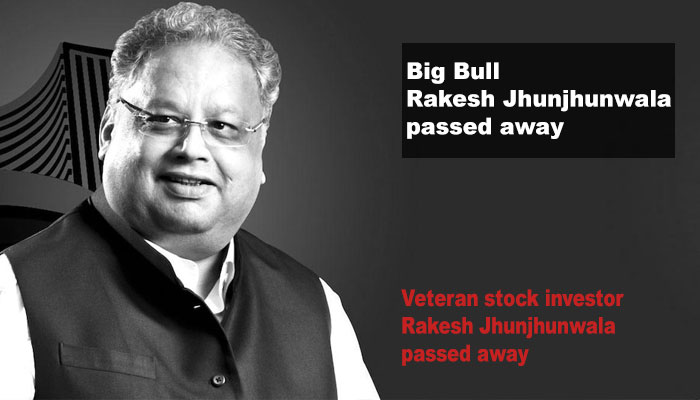