The record of throwing the fastest ball in international cricket is named after Pakistani bowler Shoaib Akhtar. Akhtar had bowled a 161.3 km/h speedball in a match against England.

Umran Malik: Umran Malik is constantly making headlines for his speed. Meanwhile, it is being claimed in many media reports that in the first T20 practice against South Africa, Umran Malik bowled a 163.7 km speedball. Actually, the Pakistani bowler Shoaib Akhtar holds the record of throwing the fastest ball so far. Akhtar had bowled a 161.3 km speedball in a match against England. In such a situation, the speed of Umran Malik is more than Shoaib Akhtar. However, Shoaib Akhtar did this feat in an international match.

However, till the time of writing the news, no statement has been issued by the Board of Control for Cricket in India regarding this. The ball with 163.7 kph speed is becoming quite viral on social media. Actually, even if Umran Malik would have bowled the ball at this speed, it would not be included in the official ICC record book. Because it has been done during the practice session.

Indian speed star Umran Malik have bowled 163.7 Kmp in net session. Even though this is the fastest ball ever bowled in any game of cricket this will not count as a record. One thing is for sure that akhtar record will be broken very soon.@BCCI @sports_tak @umranmalik555

Shoaib Akhtar’s name holds the record for the fastest ball.

It is worth noting that Pakistan fast bowler Shoaib Akhtar, popularly known as Rawalpindi Express, holds the record for bowling the fastest ball in international cricket. Akhtar bowled the ball at a speed of 161.3 km/h in the match against England during the 2003 World Cup. At the same time, Umran Malik bowled at a speed of 157 kph in this match in the first IPL season, which was the third-fastest in IPL. This season, Umran Malik impressed stalwarts like Ravi Shastri and Harbhajan Singh with his speed. 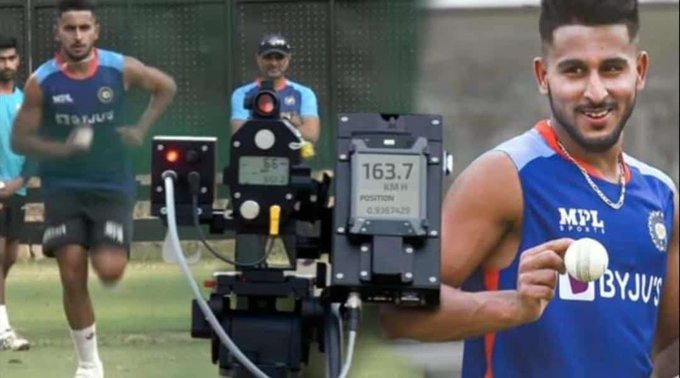