”Shabaash Mithu: Shabaash Mithu, the recently released sports biopic of Bollywood actress Taapsee Pannu, is all set to stream on OTT. Based on the inspirational journey of legendary cricketer Mithali Raj, the film has its grand digital release scheduled on Voot Select in Hindi, Kannada, Tamil, and Telugu on August 12, 2022.

Directed by Srijit Mukerji, Shabaash Mithu also stars talented actors like Vijay Raaz, Devadarshini, and Brijendra Kala, among others, in key roles. The film follows Mithali Raj’s journey from her childhood to the struggles she faced when she led the Indian women’s cricket team to the ICC World Cup final, four times. The film delivers a powerful script that shows the difficulties faced by Mithali and her battalion to emerge as the celebrated ‘Women in Blue’ in a country that worships the Men in Blue.

Earlier, on Instagram, Voot Select released a teaser of the film, which it captioned, “The untold story of a fighter, an achiever, and a revolutionary who deserves a Shabaash time and again. Watch Taapsee Pannu as ace cricketer Mithali. Raj, in the digital world premiere of Shabaash Mithu, coming soon on #VootSelect.”

Taapsee played the role of a sportsman for the third time in her career after Saand Ki Aankh and Rashmi Rocket. Taapsee Pannu shared her excitement for the OTT release of the film and said, “This film is very close to me. As someone who prides herself on championing roles and characters that celebrate women, playing the character of an iconic and truly inspirational cricketer has been a matter of immense pride and satisfaction. It was a challenging character to play, especially as each chapter in Mithali’s life revealed the many layers of this national inspiration. I am very excited about her release on Voot Select.”

“Going forward, this story will have the opportunity to reach a much wider audience and hopefully inspire other girls and young women to follow their dreams and passion for sports, similar to the relentless spirit of Indian cricket superstar Mithali Raj. I can’t wait to watch this special story once again at home in the company of friends and family and cherish this special moment, and very much looking forward to seeing the audience’s reaction to the OTT release of the film,” she added.

Directed by Sriji Mukherji, the film was released on July 15, 2022, and failed to impress the audience at the box office. 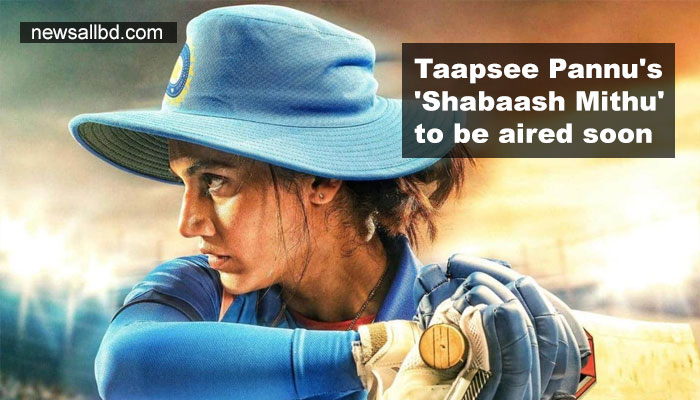