HUNTINGTON BEACH, California, U.S.A. (AP) – A small plane towing a banner crashed into the ocean Friday during a lifeguard competition that turned into a real-life rescue in Southern California’s popular Huntington Beach.

Corinne Baginski was on the beach for her 17-year-old daughter’s races in the junior lifeguard division around 1:30 p.m. when she heard the sound of the plane crashing into the water. He instinctively turned toward the tent where the teens were waiting for the next event to begin as part of the 2022 California Surf Lifeguard Association Junior Lifeguard Championship.

“I heard a thump and then I looked up at the tent and saw all the kids spinning around and running,” he said.

As well-trained lifeguards, they ran toward the accident. Professional lifeguards were also in the water immediately, paddling toward the single-engine Piper Cub hovering on its wings.

“Thank God there were plenty of lifeguards,” Baginski said.

The plane plunged into the ocean about 27 meters (30 yards) offshore, according to Coast Guard Lt. Sondra-Kay Kneen.

The pilot was taken to the hospital with bumps and bruises as a precaution, said Jennifer Carey, spokeswoman for the city of Huntington Beach.

Baginski said a friend of her daughter’s told her the plane had towed a banner. Another child on the beach said the plane appeared to lose power. The FAA is investigating the crash.

“One of the kids said the propeller wasn’t working,” he said. “He actually saw the plane going down.”

The pilot appeared to exit the plane on his own and was sitting hovering above it when lifeguards reached him, he said.

He was later seen sitting in the back of a lifeguard van on the beach wearing an orthopedic collar.

The plane floated to the water’s edge where the surf washed it back and forth. 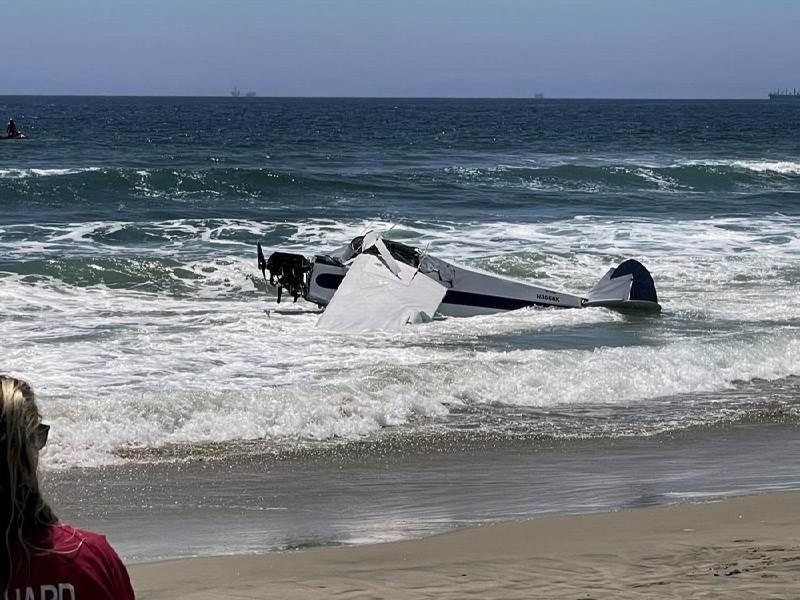