NEW DELHI: Over five million selfies with the Indian flag has so far been uploaded on the ‘Har Ghar Tiranga’ campaign website, the Culture Ministry said on Monday and termed it a “stupendous achievement”.

Calling it a stupendous achievement, the Culture Ministry shared the news on social media. The achievement is a testimony to India’s unity and public participation.

The government held grand celebrations at the Red Fort to mark the 76th Independence Day as part of ‘Azadi ka Amrit Mahotsav’ with Prime Minister Narendra Modi sharing the roadmap for the next 25 years: ‘Amrit Kaal,’ he said.
The prime minister issued a call on July 22 to join the ‘Har Ghar Tiranga’ movement by hoisting or displaying the national flag at homes.

The Ministry of Culture, the nodal agency of ‘Azadi ka Amrit Mahotsav’ also called upon people to upload selfies or photographs with ‘Tiranga’ on the campaign website.

“In a stupendous achievement, over five crore selfies of ‘Tiranga’ have been uploaded on the ‘Har Ghar Tiranga’ website,” the ministry said in a statement.

As India embarks on its 76th year of independence, concluding the 75-week countdown to August 15, 2022, was the government’s ‘Har Ghar Tiranga’ initiative driven by the nodal ministry for ‘Azadi Ka Amrit Mahotsav’: the Ministry of Culture, the statement said.

The achievement of the five crores ‘Tiranga’ selfies was achieved this afternoon around 4 pm, thanks to the participation of everyone in India and the world celebrating this special moment in India’s history, it said.
The commemoration of 75 years of India’s Independence began on March 12, 2021, as a 75-week countdown to August 15, 2022, and will continue till August 15, 2023, he said.

See also  Earthquake shakes several places, including Lucknow, with a magnitude of 5.2

The initiative dedicated to fostering a deeper personal connection with the Indian tricolor asked Indians around the world to display the flag at home or at their workplace as a commitment to the cause of nation-building during ‘Amrit Kaal’, 25 years from now until 2047. said the statement.

The program conceived in a hybrid format envisaged a physical and emotional connection with the flag itself in the personal context and also envisaged a collective celebration and amplification of patriotic fervor through the act of uploading a selfie on the special website — www.harghartiranga.com — created for this initiative, it said.

In his Independence Day speech, Prime Minister Modi said in recent days that the country has seen and experienced a new strength, a “rebirth of collective consciousness” and the rebirth of this collective consciousness is the greatest treasure of the country and is like nectar. that emerged through the years of freedom struggle, the statement said.

“Thank you, India. This is indeed a special moment of outpouring collective expressions of love and connection for the motherland. I wish you all a very happy Independence Day.”

Thank you India for your stupendous response to #HarGharTiranga 🙏!

Over 5,00,00,000 Tiranga selfies uploaded. Amazing!!
If you haven't clicked a selfie with Tiranga yet then what are you waiting for? Do it now on https://t.co/LaBpQnQUGO#AmritMahotsav #MomentsWithtiranga 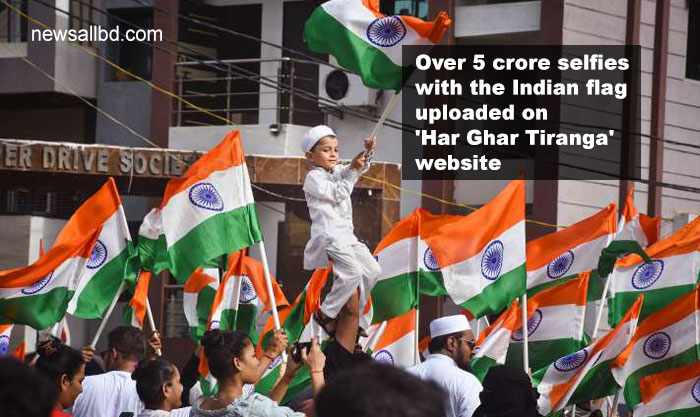