Neeraj Chopra finished first at the Lausanne Diamond League on Friday, becoming the first Indian to take the top spot at a Diamond League to meet after registering a throw of 89.08m on his first attempt. The Olympic gold medalist was unable to improve his throw on the second attempt, recording a distance of 85.18m. Chopra, who skipped his third throw, had committed a foul throw on his fourth attempt.

Chopra, who had missed the Commonwealth Games due to a groin injury he suffered during the World Championships, made a great comeback with the best throw of 89.08m, which was enough to secure the victory.

Prior to Neeraj Chopra, only discus thrower Vikas Gowda had managed to secure a top-three result in the Diamond League. He had twice finished second in the USA and Doha in 2012 and 2014 respectively.

Gowda had also secured third place twice in Shanghai and Euguene in 2015.

Neeraj, 24, produced the winning shot on his first attempt in Lausanne, returning to the floor after a month’s gap.

Chopra also qualified for the 2023 World Championships in Budapest, Hungary, by clearing the qualifying mark of 85.20m.

Chopra had finished second in the Stockholm leg of the prestigious event behind Peters with a national record throw of 89.94 m, just 6 cm short of the 90 m mark, the gold standard in the world javelin throw.

At the World Championships in Eugene, USA, he was not in medal position until the third round, but here Chopra led from the first throw to the finish, even though the eight-man field was not as strong. 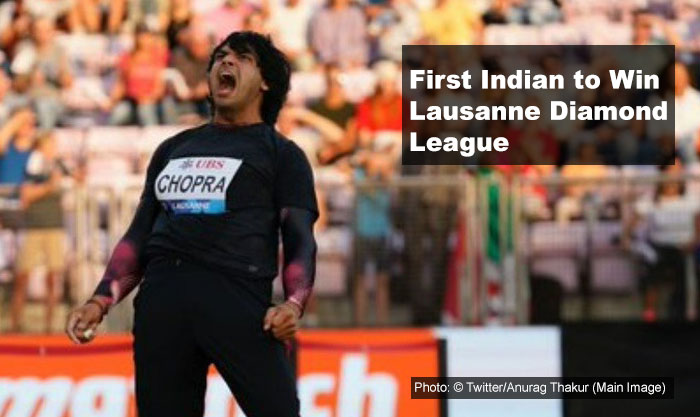