Nadal beats Djokovic in the quarterfinals at the French Open. “I lost to a better player today,” Djokovic said.

Rafael Nadal insists he can’t know for sure if any match at Roland Garros could be his last at a place he loves, a place that is loved.

For now, if he keeps winning and performing as he did during his monumental quarterfinal win over Novak Djokovic, which began in May and ended in June, Nadal will have more opportunities to play.

With a combination of brilliant shots and his trademark resilience, Nadal outlasted defending French Open champion Djokovic, 6-2, 4-6, 6-2, 7-6 (4) to move one step closer to his 14th Grand Slam clay-court tournament championship and what would be a 22nd major trophy overall, adding to the records he already holds.

One of those magical nights for me,” said Nadal.

For anyone lucky enough to be there, as long as they could stay awake or even have someone watching from afar. The match began shortly after 9 p.m. Tuesday and concluded more than four hours later, after 1 a.m. Wednesday.

That’s the world we live in.

The bracket said this was a quarterfinal, yes, but it felt like a final, from the quality of play to the quality of effort, from the anticipation that preceded it to the atmosphere that enveloped it.

The only missing ingredient: no trophy was awarded to the winner.

Nadal turns 36 on Friday when he faces third seed Alexander Zverev in the semifinals. When the topic of Nadal’s future was brought up during his on-court interview, he smiled.

See you, by the way, in two days, Nadal said. That’s all I can say.

It will be hard for any match the rest of the way to live up to this one.

Not a game, not a point, not a stroke, or, indeed, a step came with a hint of nonchalance. Both men gave it they are all. Nothing came easy.

Nadal’s 3-0 lead in the second set did him no good; Djokovic ended up taking it and would later say, I thought, okay, I’m back in the game.

But Djokovic’s 3-0 lead in the fourth did him no good, despite serving at 5-3, even coming within a point of forcing a fifth twice. Nadal saved those set points and broke there, then ran away with the final tiebreak, taking a 6-1 lead and never losing concentration after his first three match points went wrong.

I lost to a better player today, said Djokovic, who had won 22 straight sets until the 49-minute opener against Nadal.

I had my chances. I didn’t use them. That’s all.

This matchup was the 59th, more than any other two men have faced each other in the open era. Nadal cut Djokovic’s series lead to 30-29 while improving to 8-2 against his rival at Roland Garros.

Nadal now has a 110-3 career mark at the venue. Two of those defeats came against Djokovic, including in last year’s semifinals. This time, Nadal made sure Djokovic stayed behind him in the Grand Slam count with 20. Nadal broke his three-way tie with Roger Federer at that number by winning the Australian Open in January, when Djokovic was unable to play because he had not been vaccinated against COVID-19.

It really won’t get any easier from here, Zverev said after ending Alcaraz’s 14-match winning streak.

I told him at the net: you’re going to win this tournament many times, not just once,” said Zverev, the 2020 U.S. Open runner-up and gold medalist at the Tokyo Olympics last summer.

Hopefully, I can win it before it starts? beating us all.

The nightcap was saved for two players who know each other very well. The tendencies and tactics. The mannerisms and moods.

So it should come as no surprise that they engaged in such complicated points, so long 57 of at least nine strokes, with one reaching 25 that before some concluded, people in the stands let out a gasp or Aaaah! or Awwwww! or Awww! drawing reproachful whistles of Shhhhh! in response.

Chair umpire Damien Dumusois might have set a record, if such records were kept, as he mostly said S’il Vous plait, to plead with the spectators to calm down and allow play to continue.

Nadal heard much more support in the form of shouts of Ra-fa! or Vamos! or Te Quiero! Only once Djokovic began to assert himself in the second set was his nickname No-le! heard with any frequency.

See also  Suryakumar Yadav did not sleep all night, his wife shared the video and kept watching it on the cell phone.

As time passed and the air grew colder below 60 degrees Fahrenheit (15 Celsius), Nadal and Djokovic plastered the words in clay-colored capital letters in French and English along the front of the lower level of the arena, attributed to Roland Garros, the World Cup. World War I fighter pilot after whom the facility is named: Victory belongs to the most tenacious.

Early on, and down the stretch, it was Nadal getting the better of the back-and-forth baseline, pushing and pulling Djokovic back and forth, up and back, until an opportunity presented itself for a clean winner. Djokovic reacted to his miscues by rolling his eyes, shaking his head, or sticking out his palms as if to say, What’s going on?

Nadal showed no signs of being slowed down or bothered by the chronic left foot pain that flares up from time to time and kept him off the tour for the last half of 2021 and resurfaced before the French Open.

Nadal also didn’t betray a trace of fatigue from his five-set fightback against No. 9 seed Felix Auger-Aliassime in the fourth round on Sunday that lasted 4 hours, 21 minutes, nearly twice as long as Djokovic’s practice win that day.

I’m not surprised at all,” said Djokovic.

It is not the first time he is able, within days of being injured and barely walking, to come out physically at 100%. 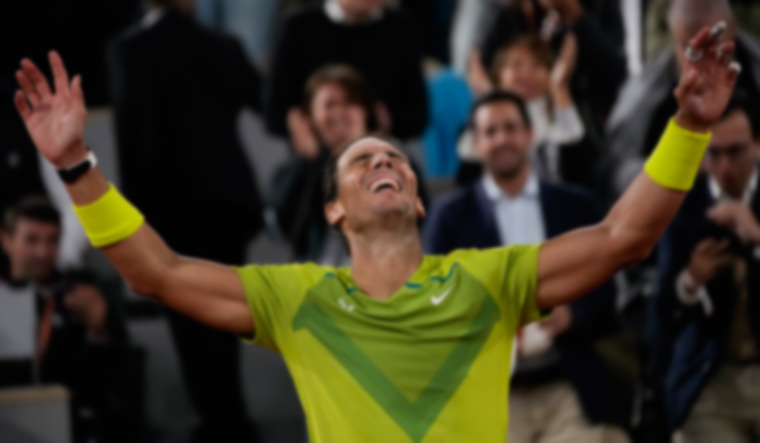