Mika Singh chooses his old friend as his wife and the winner of Mika Di Vohti is Akanksha Puri.

Swayamvar: Mika Di Vohti concluded on July 24. Actress Akanksha Puri was declared the winner of the Star Bharat show when singer Mika Singh chose her as his life partner. The other two finalists who were pitted against Akanksha were Prantika Das and Neet Mahal.

Singer Mika Singh will marry Akansha Puri after declaring his choice on the reality shows Mika Di Vohti. The reality show saw 12 women competing with each other to win the singer’s heart. At the end of the show, Mika would decide who would be his bride. The final episode saw the three finalists, Prantika Das and Neet Mahal, hold their Haldi, Mehendi, and sangeet ceremonies. In the final moment of the show, Mika had to put the wedding garland around his bride-to-be to indicate his choice of life partner. The actual wedding rituals did not take place in the program and will happen later. The singer said that he first wants to spend some time with Akshansha away from the camera.

“While Mika didn’t marry Akanksha on stage, he did put the wedding garland on her to indicate his choice. He shared that he wants to spend quality time with her away from the cameras before they take wedding vows. Mika also met Akanksha’s family. and sought their blessings as he decided to embark on this new journey with her,” reported The Indian Express.

Akshansha shot to fame after appearing on the show Vighnaharta Ganesha. The TV actress has claimed that Mika and she have been friends and have known each other for more than a decade. She was also spotted at a pooja ceremony held at Mika’s house. There was speculation that the two had married, however, both denied the news.

Speaking on what Akansha had said earlier, “So this was a paath (pooja) that he (Mika Singh) kept at his residence, it is made for positivity and good luck for the future,” she told the portal and added, “I just went there to seek blessings, but people seem to be assuming otherwise!

And coincidentally, this was on April Fool’s Day, so people thought it was a joke, but these are genuine photos and videos of her house! Mika and I have known each other for over 12 years, he’s more like family, he’s always been there for me and we share a very strong bond! But we are definitely not engaged nor do we have any such plans!” reported India TV.

Akshansha also shared photos of the sangeet ceremony that took place on the show.

The reality show saw 12 women competing against each other to become the singer’s future wife. 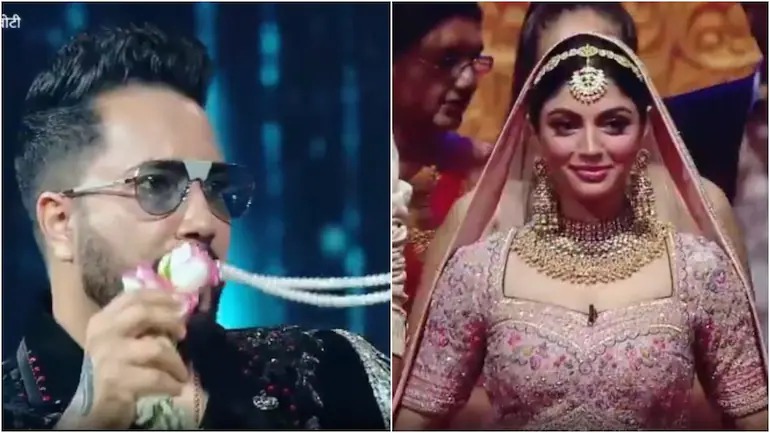