Maharashtra govt. cuts VAT on petrol by Rs. 5, diesel by Rs. 3 per liter

Shinde informed reporters after a cabinet meeting in Mantralaya that the decision would entail a burden of Rs 6,000 crore on the state exchequer.

The decision, to be implemented from Thursday midnight, would put a burden of Rs 6,000 crore on the exchequer, but will benefit the common people, he told reporters after a cabinet meeting here.

The government will also ensure that the revenue loss of Rs 6,000 crore does not affect development works, Shinde said.

This is yet another decision of the previous Uddhav Thackeray-led MVA government which Shinde, who took over as CM on June 30, has reversed.

The Fadnavis-led BJP-Shiv Sena government (in power from 2014 to 2019) had allowed direct election of sarpanches and municipal council chairmen, but the Sena-NCP-Congress dispensation led by Uddhav Thackeray scrapped the decision in 2020.

The new government will also restore the pension scheme for ‘Loktantra Sangram Senani’ or those who were jailed for protesting against the Emergency between 1975 and 1977, Fadnavis said.

Fadnavis said 3,600 people will now receive the pension and another 800 applications will be processed on merit.

“Not only Jana Sangh (BJP predecessor) and Rashtriya Swayamsevak Sangh but also political activists from all sections participated in the agitation against Emergency. My father was in jail for two years. Democracy was restored due to the efforts of these activists,” Fadnavis said.

The scheme was scrapped by the MVA government due to “pressure”, perhaps because the Congress was part of the government, the BJP leader quipped.

It was the Congress government headed by then prime minister Indira Gandhi that imposed the Emergency.

Fadnavis also said the prime minister has given all clearances for the Ahmedabad-Mumbai bullet train project.

Shinde said Prime Minister Narendra Modi called him in the morning and asked him to expedite the free administration of booster doses of the COVID-19 vaccine for people in the age group of 18-59 years.

The drive should be implemented in the next 75 days, he said.

Phase 2 of the Atal Mission for Rejuvenation and Urban Transformation (AMRUT) will be implemented in Maharashtra, Shinde informed.

The cabinet also decided to implement the ‘Swachh Maharashtra Abhiyan’ under which 400 more local bodies have been included and Rs. 10,500 crores will be spent on water supply, sanitation, and revival of water bodies, the CM said.
The scheme to provide an incentive of Rs 50,000 to farmers who repay their loans regularly will also apply to those in the Kolhapur area who received assistance after heavy flood damage, he said. 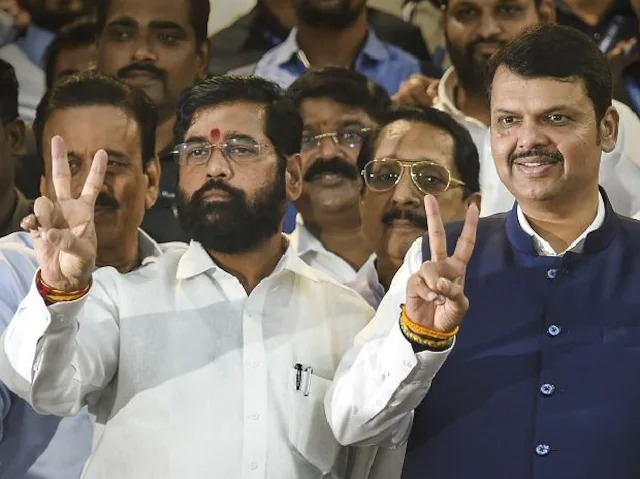