After the formation of the Shinde government in Maharashtra, the Shinde cabinet is expanded. Today 08/09/2022 at the Raj Bhavan in Mumbai. A total of 18 names of new ministers took oaths.

Of these 18 ministers, 9 are from Shinde’s side, the rest are from NDA.

Maharashtra can install a maximum of 43 ministers, including the CM. After this round of inductions, the strength of the Council of Ministers will be 20, leaving 23 vacant seats to be filled in the next expansion.

The Shinde camp has a total of 50 members. Of these, 40 are Shiv Sena rebels and the rest independents. The rebels from the nine from this group have been appointed ministers. The independents, inside sources said, were asked to wait until the next cabinet expansion. At the top of the list is the name of Prahar Jan Shakti’s Bacchu Kadu. He was minister of state in the Maha Vikas Aghadi government.

Highly placed sources said, “The chief minister, Eknath Shinde, met the MLAs well after midnight. A lot of effort was made to appease the angry members who insisted on a Cabinet berth in the first expansion.

According to sources, these are ministers who made their ‘SHAPTHGRAHA’.

Mr. Vikhe Patil, who moved from the Congress to the BJP in 2019, was also accommodated.

Among the cabinet members in the Eknath Shinde camp is Dada Base, an aide to Eknath Shinde who earlier served as Agriculture Minister in the Maha Vikas Aghadi government of Sena, NCP, and Congress. Uday Samant is MLA from Ratnagiri and a former NCP leader. 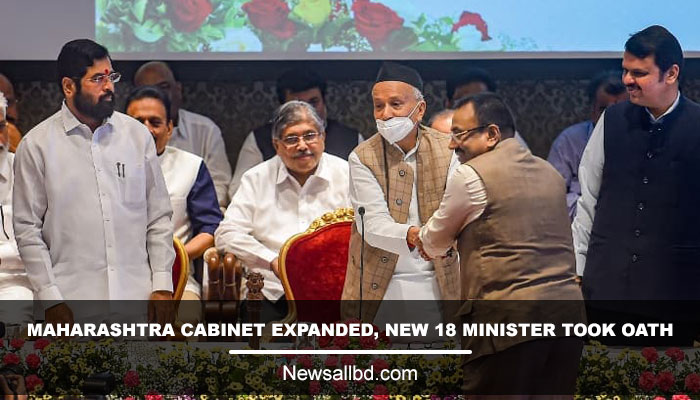