IRE vs IND 2nd T20I Highlights: India won the second T20I by four runs after Umran Malik defended 17 runs in the final over.

India vs Ireland 2nd T20I highlights: Ireland fought hard, but in the end, India, led by Hardik Pandya, held their nerve to win the second T20I by four runs and take the series 2-0. Ireland’s batsmen came in with a shout to chase 226, but in the final over, Umran Malik managed to defend 17 to help Hardik win his first series as captain. Earlier, Ireland captain Andrew Balbirnie registered a 50 off 34 balls, but Harshal Patel removed him soon after. In the last five overs, Ireland needed 62 runs to win, but they could not cross the line. Earlier, Deepak Hooda and Sanju Samson played knocks of 104 and 77 respectively while India recorded 225/7 in 20 overs. Ireland’s bowlers had no answers to stop the Indian juggernaut and in the end, India registered a mammoth total. Earlier, Deepak Hooda was at his best when he registered his maiden T20I century. Samson had scored 77 and his innings was finally ended on 17 by Mark Adair. The duo had put on over 100 runs for the second wicket and put together a stand of 176, which is the highest T20I partnership in Indian history. After opting to bat, India got off to a bad start as the team lost Ishan Kishan in just the third over of the innings. Ishan scored just 3. Earlier, India opted to bat first against Ireland in the second and final T20I at The Village, Dublin on Tuesday. 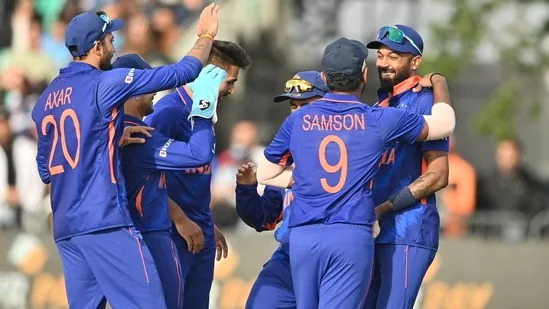